The Climate is Changing

There is now more Carbon Dioxide in the atmosphere than there has been since before humans emerged, as Homo Habilis, some 2.5 million years ago. The mid-Pliocene (3-5m years ago) was the last time CO2 was at the levels we see today (412 parts per million and counting). The world was a very different place then, with sea levels up to 20m higher and it was 3-4 degrees warmer and generally wetter. There is a great deal of evidence to suggest this is where the climate is likely to go over the next few hundred years, if not sooner.

So, it is the first time humanity has faced a climate like this. As a result, some suggest we are entering a new geologic era: the "Anthropocene". While we are a resilient species, and can undoubtedly survive this change, it will cause huge social upheaval with all the attendant dangers of migration, war and famine. However, there is hope if we act now and act together.

It is ironic that in the absence of the sudden and huge CO2 build up in the atmosphere we might have expected to be entering a cooling period (see below) but this is being overwhelmed by the warming effect of CO2. So by working together and using our ingenuity we can reduce carbon emissions and avoid the worst effects of this disaster, as we literally have the heavens on our side.

Below is a distillation of just some of the science behind the Climate Emergency we now face. Climate like all natural systems is complex and sometimes mathematically chaotic. Predictions are difficult and some times impossible. Understanding these natural systems has always been about building a consensus around how to evaluate and interpret the data available. The overwhelming consensus is that the climate is changing, that the rate of change is accelerating and what is being observed is at the 'worst' end of what current models are suggesting. This should be a source of alarm. We need to act now and we need to act together if we wish to live on a Cool Earth.

What makes the Climate Change

The climate changes for many reasons. The angle of the rotation of the earth as it orbits the sun gives us our seasons but this changes in a cycle lasting 41,000 years. Also, the earth's distance from the sun varies over several time periods, the strongest being every 100,000 years. The waxing and waning of the ice-ages corrolate well with all these cycles, known as Milankovitch Cycles. We are currently entering a period where the 100,000 year cycle would bring cooling as our average distance from the sun steadily increases causing a reduction of solar radiation by some 3% over the period. This sounds tiny, but the systems that drive our climate are very sensistive to these changes. 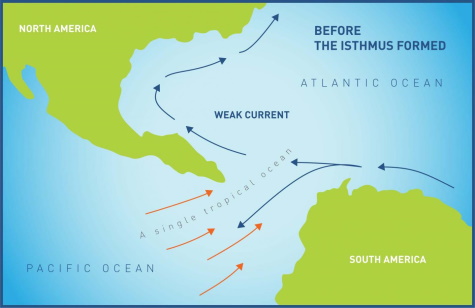 Geological events also have a big influence. The eventual closure of the Central American Seaway and the formation of the Panama Isthmus, separated the Pacific from the Atlantic and triggered changes in ocean circulation that led to the strengthening of the so called Altantic Meridional Overturning Current (AMOC) which in turn led to glaciation and the start of the cool period that we evolved in. Of course, superimposed on this cool period of some 2 million years were the Milankovitch cycles of ice ages (aka glacial periods) and the relatively warmer interglacial periods like the one we live in today.

Another major determining factor for climate is the CO2 levels in the atmosphere. The dynamics of the influence of CO2 is complex. A phase of global warming can begin due to external factors which then causes the release of C02 from the oceans which then amplifies the intial warming as a secondary effect. In this case, C02 levels lag behind the temperature rise. Evidence from rocks and ice-cores suggest this is what has happened repeatedly over the last million years. However, today we have C02 levels that are being driven up at an unprecedented rate and so CO2 is the primary cause of global warming. The oceans are being heated through the greenhouse effect of CO2 but they take time to absorb this energy due to the so called thermal interia of such a massive system. So that currently, in contrast to the last million years, the temperature rise lags behind the C02 levels by some 40 years.

The CO2 levels of the mid-Pliocene were associated with higher temperatures and this happened over many thousands of years. Today the rate at which atmospheric CO2 is increasing and the thermal inertia of the oceans means we have yet to experience the temperatures of the mid-Pliocene. If we reduced our emissions of CO2 to zero today, the temperature could still reach that of the mid-Pliocene. However, the rate of increase in carbon emissions has been a steady 2.8% per annum since before 1800. That equates to a doubling every 25 years. Such a rise is exponential and so with each passing year 2.8% represents a larger and large amount of CO2 in absolute terms. There is some evidence that this rate may have dropped slightly in the last few years but the consequences of the accumulated CO2 has yet to be realised.

There are many causes for the rapid rise of CO2 in the atmosphere and there can be no doubt that most of the rise is directly man-made. The burning of fossil fuels accounts for about 62% of man-made emissions, land use and methane make up another 27% and the other 11% comes from a variety of sources. Below is just an indicative list of how humans are causing CO2 levels to rise:

Climate Modelling is difficult and is constantly evolving. One approach that has been used by the IPCC is to examine the consequences of different scenarios. There are now five so called Representative Concentration Pathways (RCP). Each RCP is numbered according to a figure that represents the expected difference at the end of the century between the amount of solar energy received by the earth and that radiated back into space. This difference is called Radiative Forcing. So RCP 1.9 is a scenario where the amount of greenhouse gases in the atmosphere causes a net gain of energy of 1.9 Watts per square meter in 2100.

A similar but more comprehensive approach that is now being used specifies five so called Shared Socioeconomic Pathways (SSP). 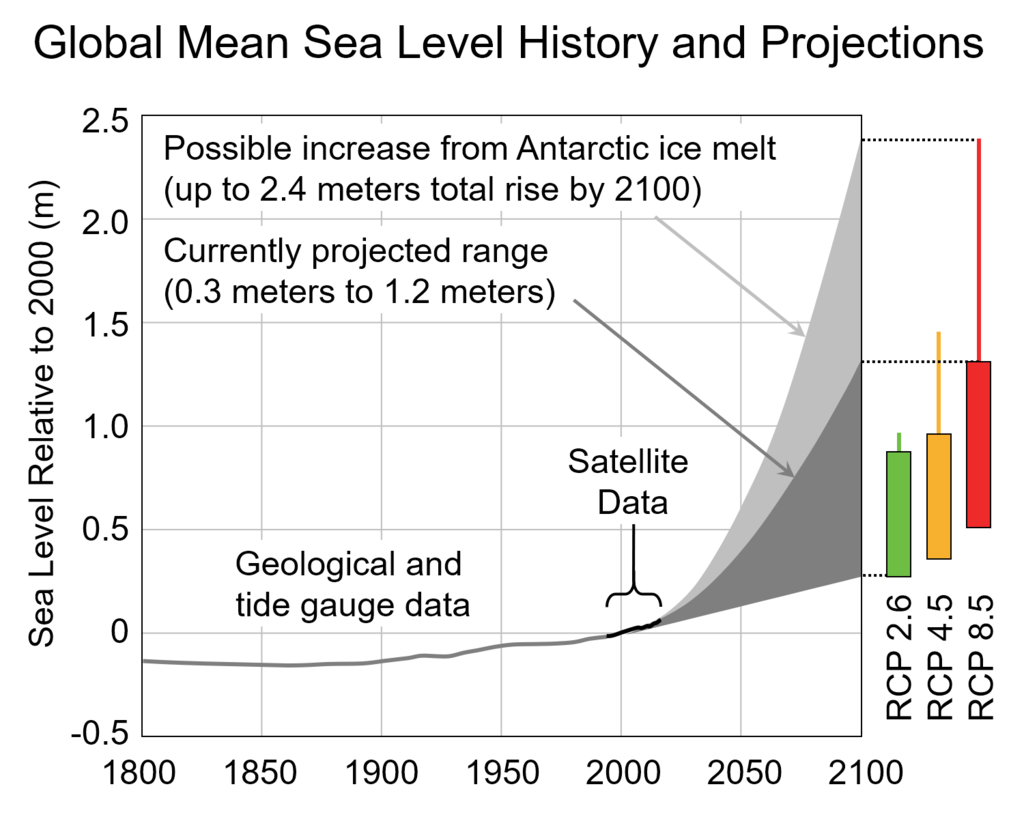 Each of the RCP scenarios is therefore associated with a level of emissions and a temperature rise as follows:

Why is Climate Change Important? 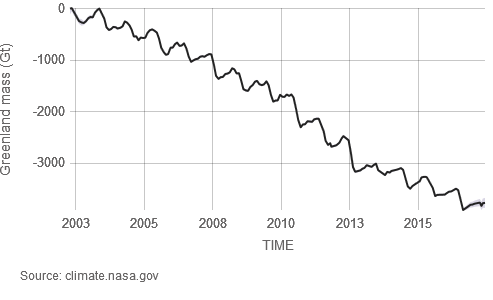 At the end of the last ice-age, some 13,500 to 14,700 years ago, sea-levels rose by some 20m in about 500 years. That's 1m every 25 years. This is known as Meltwater Pulse 1A and demonstrates what can happen when the ice-sheets of Antartica and Greenland retreat rapidly.

Sea Level rise is also caused by the expansion of water as it warms and factors like the uplift of the mid-atlantic ridge as the seabed warms. More locally the level may appear to rise due land subsidence (Jakarta). 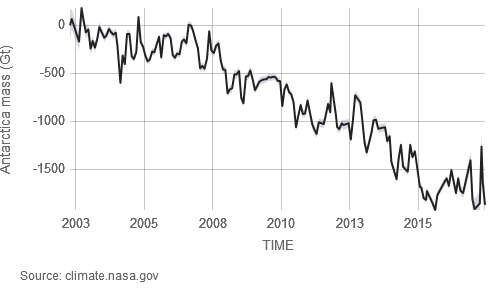 Over the past four decades, Antarctic ice loss has accelerated at an alarming rate. From 1979 through 1990, the continent was shedding ice at a rate of 40 billion tons per year. However, a new analysis found that from 2009 onwards that number rose to 252 billion tons per year. That is six times higher than the previous rate. The other source of concern is that the Eastern Antartic, which was regarded as relatively stable, is now contributing to the loss of ice. Antartic ice alone has the potential to raise sea-levels by some 56m.

Current models predict a 1m rise in sea-levels by the end of the century assuming a scenario of RCP-2.6 but there is increasing concern that these estimates may be too low.

Around 11% of the world’s population live within 10m of mean sea level (Neumann et al. 2015). The consequences of just a 1 meter rise in sea-levels makes sobering reading.

The rise in sea surface temperatures is causing more severe hurricanes and the intensification of El Niño events. bringing droughts and floods. This is already having significant socio-economic and health problems in the regions of the world affected. 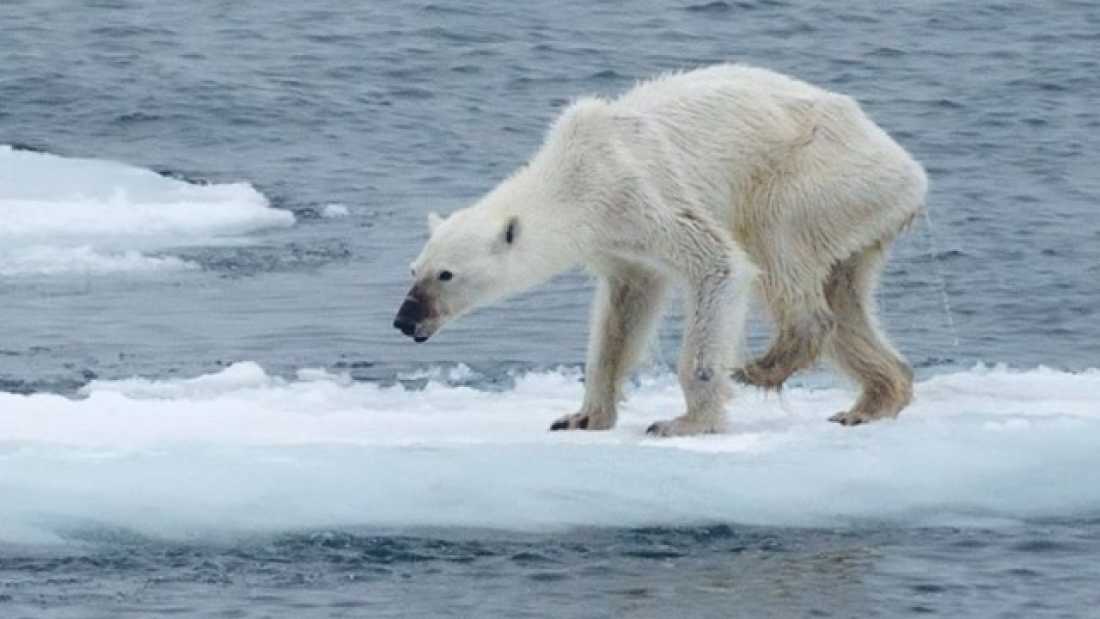 As the oceans warm they are less able to hold oxygen making it difficult for larger sea creatures which then seek better habitat and these behaviour changes can have many consequences for the stability of the food-chain. An example of this is the predicted 30% decline in the Polar Bear population by 2050 as they struggle to cope with reduced sea-ice and to find their natural prey.

Also, the aborption of CO2 causes the acidification of the oceans, making it more difficult for shell fish to generate and to maintain their shells. The loss of coral reefs is a result of acidification.

The International Union for Conservation of Nature’s Red List says there are over 30,000 species of the 112,400 assessed face extinction. That's a staggering 27%. Also, the UN's IPBES report states that one million species are now at risk of extinction.

IUCN Red List of Threatened Species states that 41% of amphibians, 25% of mammals, 34% of conifers, 13% of birds, 31% of sharks and rays, 33% of reef-building corals, and 27% of crustaceans are threatened with extinction.

The climate will change and while we need to do everything we can to limit this change (Mitigation) we also need to give thought to how we cope with the inevitable change (Adaption). While it is useful to make this distinction, there is no clear boundary between the two. We need to change our life styles to both mitigate the enormous problem we will leave to the next generation and to establish a way of living that is less destructive for the future. 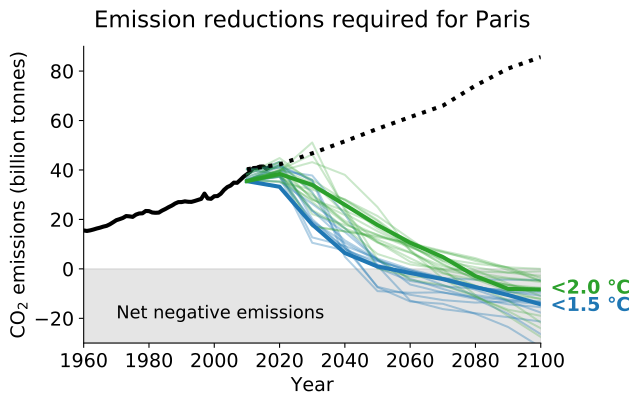 The first thing to say unequivocally is that planting trees is a good thing. What is not good is to use this as an excuse not to reduce carbon emissions. There is much talk of reducing our net carbon footprint to zero. However, this does not address the real issue which is the accumulated CO2 that is already in the atmosphere.

To meet the RPC 2.6 targets of the Paris Agreement we need to reduce the levels of C02 in the atmosphere, not just stabilise it.

Pollution comes in many forms, some directly affects the climate, like air pollution, while others like plastics pollution have an indirect affect by causing biodiversity loss which in turn affects the carbon balance. Humans currently produce about 260 million tons of plastic a year. When plastics enter the ocean they do not biodegrade but are broken into smaller pieces which are then consumed by marine life and can cause digestive problems, internal bleeding and death.